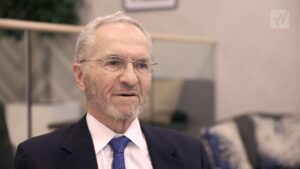 The American professor is also a blackjack player and a hedge fund manager.

An invention he is most well known for was his wearable device that exposed mathematical advantages at the Blackjack table. Furthermore, he showed that a player could use card counting techniques to remove the house advantage from blackjack.

Thorp used an old IBM computer here to devise his theories on blackjack.

The Game of Blackjack

During his experiments at Lake Tahoe, Reno, and Las Vegas, Thorp tried out his blackjack theories. In the first week, he won $11 000. In addition, he organized a Baccarat team that was also successful.

He also, in collaboration with Claude Shannon at MIT, developed a computer one could wear on their belt. Both Thorp and Shannon used it while playing Blackjack and Roulette in various casinos.

Thorp also wrote the book Beat the Dealer in 1966, which sold over 700,000 copies. The book made it to the New York Times bestseller list. In 1967 he published a book titled ” Beat the Market ” that was also very successful.

What is he doing now?

Thorp ran his own hedge fund for 30 years. The firm, Princeton Newport Partners, was a successful hedge fund before it was disbanded. Thorp left the gambling world, but he is still active in the trading world, and at the age of 87, he is worth $800 billion.